We are a group of experienced designers and developers.
We set new standards in user experience & make future happen.

A specific touch visualization is included in Logic Machine
for Android and iOS system based touch devices.

Logic Machine acts like IP router with functionality like KNX telegram filter by source and group addresses, firewalling and quality of service.
It can be used as KNX Line coupler or Area coupler.

There is a possibility to enable logging for each
of the KNX objects to trace its historical activity afterwards.

To unite two or more offices over Internet secure tunneling
should be used making one common KNX network over TCP/IP network.

There are three types of scripts implemented in the Logic Machine:

− Event-based – scripts that are executed when a group event occurs on the bus.
Usually used when nearly real-time response is required.
− Scheduled – scripts that run at the required time and day.
Can be used for various security systems and presence simulations.
− Resident function – scripts that use polling to check for object state changes.
Usually used for heating and ventilation when data is gathered from more than one group address.

You can use unique names or several tags to mark your objects.
This way group addresses can be easily changed without the risk of breaking scripts.
Tagging system allows working with several similar objects at once.

Scripting editor features built-in code snippets which make creating scripts significantly easier for the end-user.
All customers gain access to the scripting repository with examples and tutorials for all common scenarios.

Logic Machine automatically adds new objects to the database when group events occur, so there is no need of doing it manually.
Just set the correct data type and your new object is ready for scripting.

Installation is done in trade center consisting of 16 floors.
For transparency purposes only three are showed in this application example. 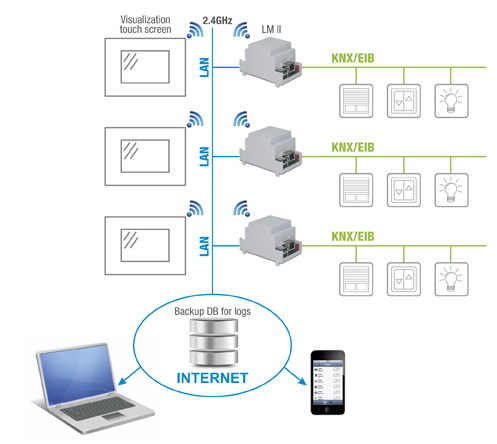 You can download our information materials as PDF files here.